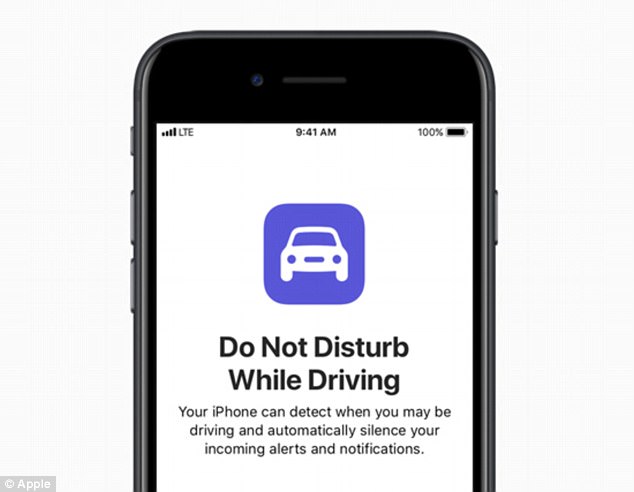 According to the statistics, the increase in the penalty for using a mobile phone whilst driving has had little impact. Clearly too many of us are so addicted to our mobile phones that even the shortest journey results in separation anxiety and we are simply so curious that we can’t resist checking our mobile phone every time it beeps. So, who better to solve our addiction problems than, you guessed it- Apple!

The tech giant, responsible for the I-phone and the I-pad, announced its latest update at its most recent developer’s conference and it promises to go some way to curing our tendency to check our mobile phones whilst driving. The update, due to be rolled out worldwide as part of the IOS 11 update in the autumn introduces a ‘Do Not Disturb Whilst Driving’ feature which will activate whilst you are driving.

But how does it work? Well, the geniuses at Apple have developed the update to allow your mobile phone to detect when the car is moving or if the phone is connected to a USB cable or Bluetooth, which will normally happen as soon as you get into your car for those lucky enough to cars fitted with Bluetooth as standard. Your mobile phone screen will then lock preventing access to your apps and the phone will withhold any notifications including text messages, WhatsApp messages and other app notifications. Apple and Google maps will still be available to drivers but you will not be able to input addresses whilst driving.

There may of course be occasions where your mobile phone mistakenly believes that you are driving and so there is an ability to deactivate the ‘Do Not Disturb Whilst Driving’ feature. Unfortunately, this will undoubtedly be taken advantage of by those who simply cannot stomach the thought of not knowing what messages and notifications they are receiving whilst driving and so we will continue to see mobile phone offences being prosecuted through the courts but we have no doubt that this new feature will have an impact in reducing the number of mobile phone offences committed.

As specialist road traffic lawyers, we would certainly encourage drivers to use this new feature when it becomes available. In our experience, many drivers often pick up their phone whilst driving to move it to a safer location within their vehicle. Although we don’t condone this, if the mobile phone has not been used then an offence has not been committed, yet many drivers in this situation are stopped by the police and prosecuted for driving whilst using a mobile phone.  We believe that by using this new feature you will be able to demonstrate to the police that the mobile phone is not being used if you are wrongly accused which would hopefully prevent you being wrongly prosecuted or being given a conditional offer of fixed penalty.

If you are charged with driving whilst using a mobile phone get Scotland’s award-winning road traffic lawyer on your side, with an 85% success rate in relation to mobile phone offences and 95% of our clients keeping their driving licence we are the only specialist road traffic lawyer to call so come visit our Glasgow office or call 0141 465 3333 now!

previousThe General Election- What it means for motorists!