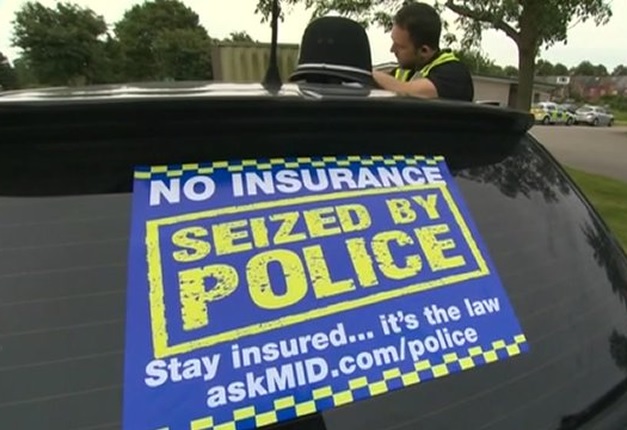 Everyday in Scotland drivers are stopped by police for driving without a valid policy of insurance, much to their surprise. However, it’s important to note that even if your guilty you don’t need to take the penalty points and the fine- not one of our Mr Sheridan’s clients have taken a single point in over 3 years!

The police have access to the Police National Computer whilst on patrol which gives them access to information about every vehicle on the road including whether a vehicle is insured and whether it has a valid MOT certificate. So, whilst the police are following your vehicle in traffic they may well be checking the information held for your vehicle and this is how many drivers are stopped for driving without insurance.

In our experience many drivers often dispute the suggestion that there is not a valid policy of insurance in place when stopped by police. If a driver in this situation is adamant that they are insured the police will normally contact the Police National Computer operator who will in turn contact the Motor Insurance Bureau, who hold a database of detailed information on motor insurance policies, allowing the police to confirm within minutes whether a driver is covered by a policy of insurance or not. If this facility is unavailable for any reason, then the police often issue a HORT/1 form requiring that the driver produce a policy of insurance to their local police station within 7 days.

Unfortunately, it is a regular occurrence that drivers have at some stage arranged insurance that entitles them to drive but something happens, often without their knowledge, which invalids the policy leading to a situation whereby they only become aware of a problem once they are stopped by police and subsequently make enquiry with the insurance providers.

Insurance companies can often cancel policies for a whole number of reasons including missed payments or a failure to provide them with information. However, the problem arises when they do not inform the driver that the policy will or has been cancelled which in our experience happens regularly.

Fortunately, the law in Scotland recognises that drivers can often be caught out despite holding a genuine belief that they were insured to drive and that there would have been no or little chance of them knowing otherwise. Accordingly, if you are guilty of driving without insurance but had a genuine belief that you were insured at time then you may have a special reasons argument.

A special reasons argument can be put forward at a diet of proof following a guilty plea. The purpose of this argument is to convince the court that although you are technically guilty of the offence, there are special reasons as to why the offence was committed which would merit the court not imposing penalty points or a fine on you.

The caselaw on special reasons in cases involving driving without insurance is clear insofar as it provides that as long as the court are convinced that the driver held a reasonable and genuine belief that they were insured to drive at the time of the offence then special reasons exist. The standard of proof required for special reasons is on the balance of probabilities.

Not every case will meet the criteria for special reasons and it is essential that if an argument is to be put forward that it is done properly as there are no second chances. We have the expertise and experience to thoroughly prepare your argument and present your case in a meticulous fashion supported by the latest caselaw to ensure you have the best possible chance of success- Our Mr Sheridan hasn’t lost a special reasons proof in over 3 years!!!

So, if you have been stopped for driving without insurance call us now on 0141 465 3333 for a free consultation and take the first step to protecting your driving licence!

previousPrivate Parking Tickets- To Pay or Not to Pay?